Star Chart for VR is available now on the Gear VR & Carboard (iOS & Android), and it's the ultimate virtual reality experience!

Explore the Solar System in a profound, beautiful and accurate real-time simulation. From the Sun to the smallest moons of Saturn and out to the coldest, darkest, farthest reaches of Pluto. You can gaze down and marvel at our Solar System from above, or look up in wonder at the rings of Saturn. You can feel the awe of floating in space around worlds no human has yet set foot on. Understand how the constellations of our night sky are made up of stars distant to each other in both space and time. Embrace the impossible distances of our solar system and the inordinate scale of our universe.

This first iteration of Star Chart for VR includes:

More features and platforms will be added as we continue development.

Mountain Biker - Arcade Action Downhill Mountain Biking! Shred trails world-wide, then Build and Share your own! Follow us on Facebook for more details on development, inspiration and joining to our iOS BETA testers.

Mountain Biker is a game that lets you experience the thrills of racing downhill on a mountain bike.

Star Chart breaks the 20 Million user mark! World-wide and across multiple platforms, Star Chart is now installed on more than 20M devices and that number is increasing by around 500K users per month.

If you haven't yet downloaded Star Chart for your device, it might just be time to Get Star Chart Now!

Star Chart brings the beauty and magic of the night sky to life via the latest technology. More than 12 million people have downloaded Star Chart on various mobile platforms since launch (nearly 8M in the last year alone), and we are now very proud to have brought the very best version of Star Chart yet to Google's latest tech offering: Glass.

Our intention with Star Chart is to let anyone explore, marvel and learn about the visible universe as effortlessly as possible. The intuitive interface of Glass has made the already simple task of using Star Chart to star gaze even more seamless.

Written from the ground up for Glass, Star Chart uses a variety of technologies to reveal the mysteries of the night sky. GPS, compass, gyroscope, accelerometer, voice activation, powerful processing and text-to-speech all combine to inform users about the celestial objects they are looking at, whether they be constellations, stars or planets.

Simply say “OK Glass. Explore the Stars” and Star Chart will overlay a visual representation of the night sky into your Glass display, identifying the entire night sky. With the new text-to-speech API Glass can also speak directly to the user, imparting interesting facts about the brightest objects in the night sky.

“One of the joys of working on Star Chart is the ability to create the future. Glass is the sort of technology we’ve read about in our favourite science fiction novels and until recently only dreamt of making. Experiencing Star Chart on Glass is in many ways surreal even for those of us who coded it!” says Chris Walley, creator of Star Chart and co-director of Escapist Games.

As Star Chart continues to WOW users with its graphics and accuracy, we post some videos of our latest features and some of the amazing things you can experience in Star Chart.

One of our first videos was of the 2012 Venus Transit using all in-app footage from an iPad. In one week this video achieved over 330K views. This video is the first of many we will add to our channel. Expect more to show up soon, as we add a tour feature to Star Chart allowing users to tour events within the solar system and beyond.

Star Chart hits desktops with a launch on Windows 8 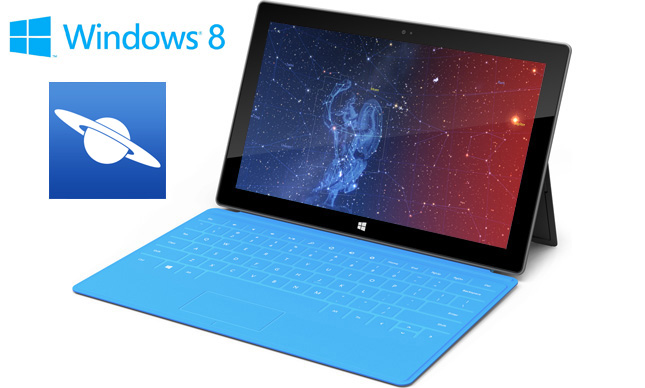 With the announcement of Windows 8 coming to tablets, we thought that Star Chart would make a great addition to this traditionally desktop and laptop platform. So, while Star Chart makes use of both the mouse and keyboard, we also focus on making Star Chart work well with AR enabled devices on Windows 8. Expect to see some amazing tablet Windows 8 devices running Star Chart soon!

We are pleased to announce that Star Chart has also been tested thoroughly on and enhanced specifically for Intel chipsets. To get the best rendering effects and other special features including voice control, we recommend you use Star Chart on an Intel Ultrabook.

We are proud to announce that Star Chart has come to Windows Phones. With the slickest AR experience we've been able to achieve so far on any device, the Windows Phone version of Star Chart is a joy to use. With stars, planets, AR and night mode already included, the next update will bring you constellations and messier objects. We hope you enjoy using Star Chart on your WP device soon.

We are very proud to announce that Star Chart has arrived on Android, and is now available on Google Play.

Star Chart for Android contains many new and enhanced features including Voice Control for english speaking users. Tap the microphone button and ask Star Chart to "fly me to the moon", "show me Venus", "Look at Andromeda" and a whole lot more.

Here is a video showcasing our Android Voice Control in a development version of Star Chart.

Star Chart: a window into the visible universe.

Can’t see the moon? Want to know where it is? Look through the eyes of your iOS device to see a virtual window into the visible universe.

Using state of the art GPS technology, an accurate 3D Universe, and high tech mobile processors, Star Chart calculates – in real time - the current location of every star, planet, moon, constellation visible from earth and shows you where they are; even in broad daylight, or beneath your feet!

Download Star Chart via iTunes. Go check it out.

Star Chart
A window into the visible universe